This post is quick look at installing docker (and using it a bit) on a Ubuntu 14.10 based laptop.

I know many people don't think of Docker as a secure system when compared to virtual machines provided by something like KVM or Xen. But that is just one viewpoint.

Another way to look at Docker is that it's an easy way to use container technology to limit what applications can do on a server, ie. a simpler way to use MAC security concepts. If one looks at Docker as a replacement for virtual machines, then yes, it might not look as secure. But that is probably the wrong way to think about Docker, at least at this time. OK, so maybe no multi-tenancy yet. But single tenancy? Why not!

If you want to read up on Docker there is a nice Docker cheat sheet available. Also the official documentation is quite good.

Seems like the Docker package is still called docker.io? I thought they had fixed that. There is another package named "docker" so they had to choose a different name. At least it seems the Docker command is just docker now.

At first, you won't be able to run Docker commands without sudo. Permission denied!

If that's OK with you, then don't do the next step.

Step 2: Add your user to the Docker group

Now add your user to the Docker group.

At this point you should relogin, but if you don't feel like doing that you can run:

to relogin as yourself in order to have the Docker group permissions.

Now I can run Docker commands without sudoing to root.

As an example, let's install Drupal via Docker.

Next we'll build the image.

Now the image has been built.

We can start up a Docker container based on that image.

A container has been started.

If I go to that IP in a browser, the drupal login page will show up. 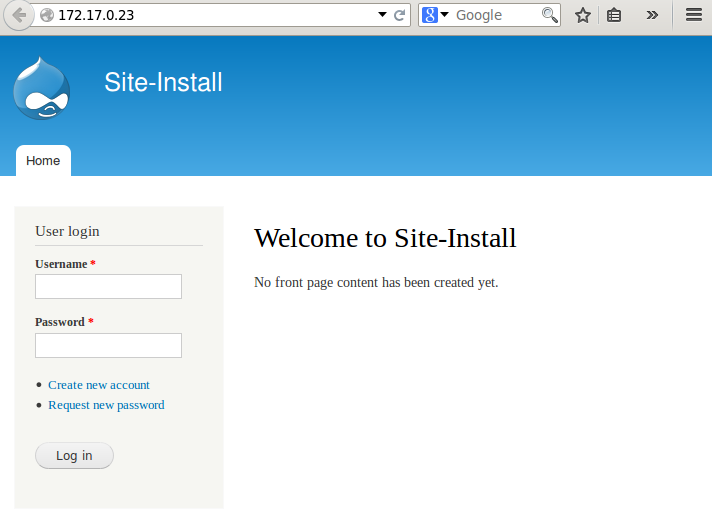 We can run docker log <container> to see what is going on. Most Dockerfiles for creating images will print login information and passwords and such to the log so that they can be accessed. Often each time passwords will be different. This probably isn't the best thing to do, ie. printing passwords to the log, so some Dockerfiles will allow environment variables for passwords, which is what I would suggest doing. But in this case we're just tossing up a quick drupal install for testing.

Below we can see Installation complete. User name: admin User password: admin so that is the Drupal login to use.

Back in the browser, login to Drupal and start testing it out.

Even as someone who is interested in security I am still a big fan of Docker. I think at some point Docker will become as secure as KVM/Xen based virtual machines or OpenVZ containers, Solaris Zones, BSD Jails, etc, but there is still more work to do. However, if you take a different viewpoint of containers and do not try to compare them to virtual machines, there are situations where a Docker based system could be more secure, especially if you think of Docker as an easy way to use container technologies that provide additional separation from the underlying OS.

Also, Docker is not just a container sytem, it's also a software delivery system that allows IT workers to develop systems that can be deployed anywhere Docker can be. On its own that feature is quite powerful.